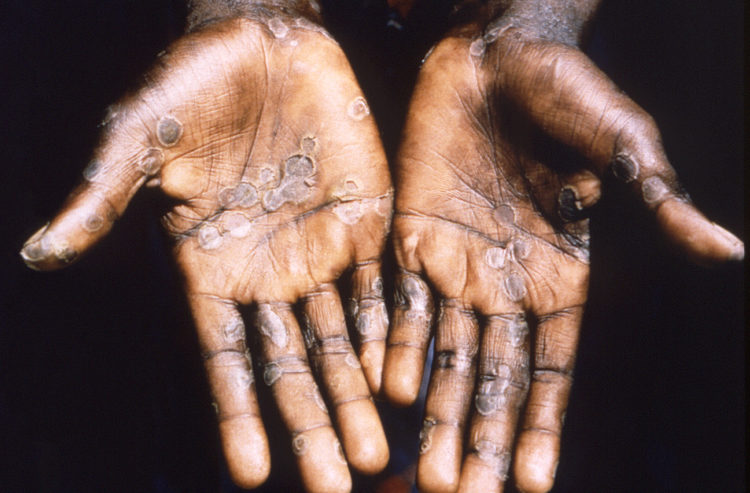 1997 Brian W.J. Mahy, BSc, MA, PhD, ScD, DSc This image was created during a investigation into an outbreak of monkeypox, which took place in the Democratic Republic of Congo (DRC), 1996 to 1997, formerly Zaire, and depicts the palms of a monkeypox case patient from Lodja, a city located within the Katako-Kombe Health Zone, of the DRC. Note how similar this maculopapular rash appears to be when compared to the rash of smallpox, also a Orthopoxvirus. In 1996, 71 suspected human monkeypox cases were reported from the Katako-Kombe Health Zone, Kasai Oriental, DRC. These initial reports suggested predominant person-to-person transmission and prolonged chains of transmission. Two cases were confirmed by monkeypox virus isolation from lesion material. In February 1997, an investigation was initiated. Our report describes epidemiologic observations and laboratory results supporting the conclusion that repeated animal reintroduction of monkeypox virus is needed to sustain the disease in the local human population. For more extensive details, as well as citations, see the link below.

PHIL images 12745 through 12784 depict a full slide presentation telling the story of this investigation.